While I have played a bit with Fosshape, I haven't attempted to really make anything from it until now. I had a McCall's pattern 7335 for some hats and decided to make a small top hat, one that will attach to a head band and perch on top of my head, not a real style top hat. 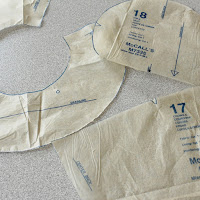 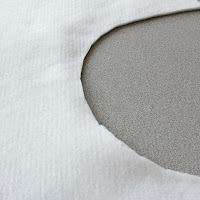 I then sewed the pieces together as instructed in the pattern instructions, except the seam of the brim and the seam going up from the brim. I overlapped these seams (having drawn the seam allowance on to indicate where the overlap should be) because I was concerned about the bulkiness. You can see the lines that I drew on, in the image below. 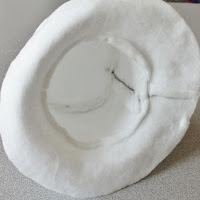 Once the pieces were sewn together (I used a long machine basting stitch), I steamed the whole hat and shaped the brim to turn up on one side. I plan on picking up some oven gloves that allow dexterity as I did find the steam got a bit hot. The Fosshape was never too hot to handle but my fingers got exposed to the hot steam. So be very careful. 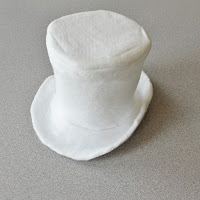 The process took surprising little time, maybe about an hour! The hat is not finished as I'm trying to decide what I want the final colour to be. I think I may spray paint it black and use some interesting ribbons and feathers to decorate it.

This product is good for many things, including masks and body armor. Check out my later blog post on Fosshape Armor.

The Regency Corset a.k.a. the Bridgerton Corset
February 8, 2021

Buying Corset Supplies - If you never have before
October 2, 2020